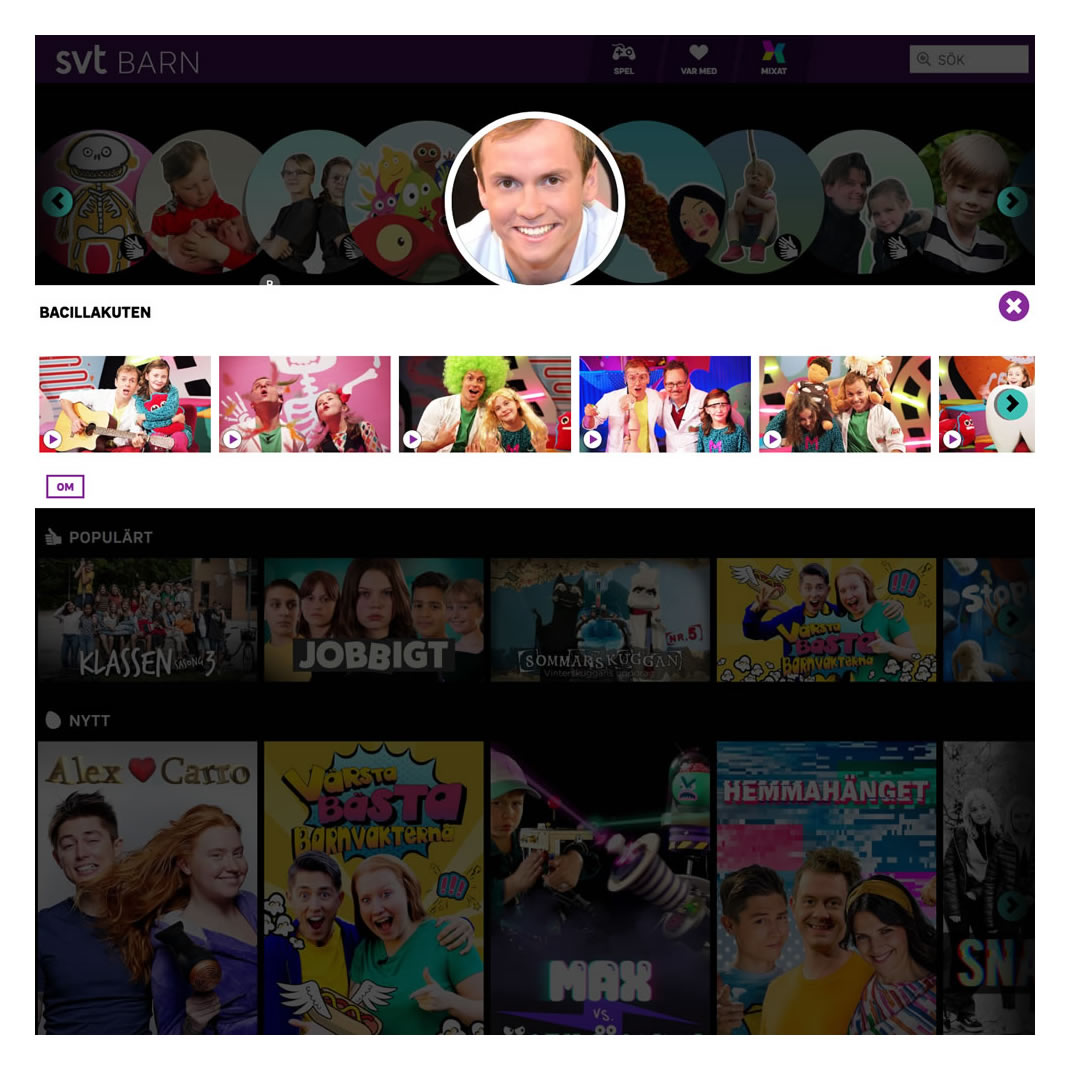 Re-imagine online video watching to dramatically increase number of minutes viewed.
That was the mission Malin, product manager for SVT Kids Online, gave my team in 2012. I worked on the service for a year and led the work on defining how kids interact with the shows.

Before you read on, go watch an episode :)

I also wanted to understand media consumption in the context of our audience – 3 to 11 year olds – and of the adults in their lives.

To help giva an initial answer to the questions above I participated in a review of internal and public media consumption statistics and academic research. I also used ethnographic methods, for example I joined families for breakfast. I led parts of our competitive analysis and I met kids to understand how they, physically, use VOD services like Netflix. I also consulted our usage statistics, including using CrazyEgg to create heat maps of usage on the existing site.

Based on my, and my team mates’ work, we chose to build:

The main experience goal for the service became:

A three year old can find and play their favourite show – on their own, without help from an adult.

The foundations work taught me how good it is to gain insights from a broad set of sources. It’s when, for example, public statistics is combined with the results of ethnographic research that real insights can be gained. Also, this was the first time I did at-home research. :)

When choosing and defining how kids will find and watch shows, the biggest constraints for my work were:

I explored how the interface might function with the help of 29 prototypes, built in HTML & JS. Many of the ideas came from other members of the team – and I was the conduit. Some of the prototypes are still available to play around in. Remember that they work best on iPads.

I used each prototype to explore one area, or answer one or a few questions such as:

Of course I did not have the answers. I’m (mostly) an adult, after all.

So I met, on my own or together with members of the team, a few hundred kids and had them use the prototypes. How they used them, and whether they managed to watch their favourite show or not, gave us the insights we needed.

A few of the patterns we settled on:

How to effectively conduct usability tests was one of the big learnings from the pattern work. Also, the work taught me a lot about kids! :)

As the service was being built I led a private, remote beta with 70 families. They were given access to the service and over the course of three months I interviewed families about how they used the new service, and found some problems that we then fixed.

After launching Barn Play I conducted A/B tests of some parts of the interface, for example whether we should use buttons or button+labels, and which types of categories are most engaging.

The longitudinal family beta was a first for me, and creating and leading it taught me a lot about participant recruitment and how to do remote research.

Already a few months after launching the new service, total time spent had increased fourfold over the previous video watching solution, while maintaining the staggering 850 000 monthly visitors (there are around 800 000 kids in the age group, so “on average” all kids in Sweden use the service every month).

Even more important to me is that we accomplished the experience goal we set ourselves: Kids as young as three years old find and watch their favourite shows on SVT Barn Play. No adults required.

Next post in the series: Design research: SVT Kids Online